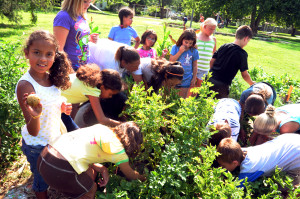 Food in the United States travels an average of 1300 miles from farm to fork, changes hands half a dozen times, and consumes 10 calories of fossil-fuel energy to produce a single calorie of modern supermarket food (Kloppenburg, Hendrickson and Stevenson, 1996, p. 33, 42; Pollan, 2008). Producing food locally greatly reduces the greenhouse gas emissions related to transportation of food.

Fruits and vegetables sold in supermarkets spend as many as 7 to 14 days in transit. During this time, almost 50% of the transported food is lost to spoilage. Locally grown food reduces or eliminates this transit time, helping to greatly reduce waste (Community Food Security Coalition, 2003, p. 4).

Community gardens have been shown to increase property values in the immediate vicinity where they are located. In Milwaukee, properties within 250 feet of gardens experienced an increase of $24.77 with every foot and the average garden was estimated to add approximately $9,000 a year to the city tax revenue (Bremer et al, 2003, p. 20; Chicago, 2003, p. 10; Sherer, 2006).

Been and Voicu estimate that New York’s “gross tax benefit generated by all community gardens over a 20- year period amounts to about $563 million. Under the scenario in which the local government would have fully subsidized the garden provision [which is rarely the case], the city’s total investment would have amounted to about $83.5 million. Thus, the estimated net tax benefit would be, in the aggregate, about $480 million or, per garden over $750,000” (2006, p. 28).

Developing and maintaining garden space is less expensive than parkland area, in part because gardens require little land and 80% of their cost is in labor (Saylor, 2005).

Community gardens provide a place to retreat from the noise and commotion of urban environments, and have been shown to attract small businesses looking to relocate (Sherer, 2006).

While vacant lots can be magnets for litter and criminal activity, community gardens are observed and managed by the gardeners, resulting in a cleaner space and more active local community. All of this often comes at little or no cost to the city (Schmelzkopf, 1995).

Community gardens allow families and individuals without land of their own the opportunity to produce food, and provide a place for gardeners to share knowledge and skills.

Gardeners save significant amounts of money on produce. One project estimated that community gardeners saved between $75 and $380 in food costs every season (adjusted for inflation from 1994 to 2011) (Hlubik et al. 1994; Armstrong, 2000).

Community gardens provide access to fresh, traditional produce and nutritionally rich foods in low-income neighborhoods, where nutritious food is much less available than in other areas. “A study of all food stores in three low-income zip codes in Detroit found that only 19%, or fewer than one in five stores, carried a minimal ‘healthy food basket’ [of] products based on the food pyramid” (Pothukuchi 2003).

Studies (like the one conducted by Lackey and Associates) have shown that community gardeners and their children eat healthier, more nutrient rich diets than do non-gardening families (Bremer et al, 2003, p.54).

People who garden (or who live with someone who gardens) tend to eat more fruits and vegetables on a daily basis. In a survey in Flint, Michigan, while only 17.8% of respondents from non-gardening households ate fruits and vegetables at least 5 times a day, that number rose to 32.4% in households with a gardener. The same study showed that gardeners also tend to eat one more serving of fruits or vegetables per day than non-gardeners (Alaimo et al., 2008).

Increasing the consumption of organic local produce reduces exposure to chemical fertilizers and pesticides. Local food can also “be eaten fresh, without the preservatives that are typically added to produce that is shipped long distances” (Bremer et al, 2003,p. 54).

Multiple studies have shown that natural areas such as community gardens grant a variety of mental health benefits. Being in natural places fosters recovery from mental fatigue, improves outlook and life satisfaction, helps us to cope with and recover from stress, improves our ability to recover from illness and injury, restores concentration, and improves productivity (Maller et al., 2005).

Gardens can be areas for recreation and exercise. According to the American Journal of Preventive Medicine, the “creation of or enhanced access to places for physical activity combined with informational outreach” produced a 48.4% increase in frequency of physical activity in addition to a 5.1 percent median increase in aerobic capacity, reduced body fat, weight loss, improved flexibility and an increase in perceived energy (as referenced in Sherer, 2006).

Gardening is considered a moderate to heavy intensity physical activity, and has been linked to significant beneficial changes in total cholesterol, HDL cholesterol, and systolic blood pressure (Armstrong, 2000).

Just 30 minutes per day a moderate exercise, like gardening, not only helps lower blood pressure and cholesterol, but also helps prevent or lower the risk of diabetes, heart disease, osteoporosis, obesity, depression and some cancers.

A big thanks to Gardening Matters for these statistics!